From North Star to Mars 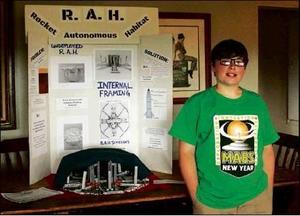 The challenge invited students to identify a problem, challenge or need that a colony of earthlings would face on Mars and try to solve that challenge. The competition was open to second- through eighth-grade students from any district.

“There wouldn’t be a habitat when you got to Mars, and building one would take too long,” Brandon, 12, said. He added that his rocket would expand and would feature a space for agriculture in addition to living space.

This challenge was held in Mars, Pennsylvania, during the Mars New Year celebration May 31 through June 2. New Year’s Day on Mars would be celebrated every 687 days because of the planet’s longer orbit around the sun.

The three-day challenge allots time for judges to thoroughly engage with every student, so their final decisions can be properly made.

Hurley won a $600 prize along with a monetary gift to his school to promote STEM. FirstEnergy Corp. divided $12,000 among the winners and the schools involved.

Rebecka Hurley, Brandon’s mother, said she is proud of Brandon’s work. She said he knows “way more about space and science” than both her and her husband.

She jokingly added that she often has to Google a lot of what Brandon speaks about, including what is called aeroponic agriculture. Brandon’s project features aeroponic agriculture, which is the process of growing plants in the air by misting them with nutrient-filled water without the use of soil.

He explained this process and how his rocket autonomous habitat operates to judges, including a professor of hydroponics at Chatham University in Pittsburgh.

Brandon said the interview process was nerve-wracking, but he felt confident following questions such as, “How does the habitat unfold?”

He plans to attend college at either MIT or Harvard University so he can go on to work for NASA as an aerospace engineer.

Both his mother and his school support his efforts and his dreams.

Karen Walker, his fifth-grade teacher who aided him in applying to the challenge, said she was impressed with his display and model of a rocket autonomous habitat.

Brandon shared some final thoughts about his future career.

“You can make a living being an accountant, but that doesn’t really give you a lot of thrill in life. No offense to all you accountants out there,” he said.